Today is food revolution day!  If you don’t know about Jamie Oliver’s Food Revolution you can check out all sorts of info on his webpage Here.  Food Revolution is about each and every one of us taking a stand when it comes to food by making small changes that push for more positive changes in our current food industry.

Food Revolutionaries encourage people to cook with your kids, buy better products that support a more fair system, and read up on current food issues.  I think the most important aspect of the Food Revolution is getting back to cooking with real food and ingredients.  Health issues are running rampant in our country and many of the health issues people face can be contributed to food choices.  So, I challenge you, even if it’s just for today to only eat real food.  Take one small step in changing your habits, your children’s habits, and the direction of the food industry and only eat whole unprocessed food, just for today.  I promise it’s not that hard,  and if you need a little help Jamie Oliver has some delicious recipes you can check out Here . 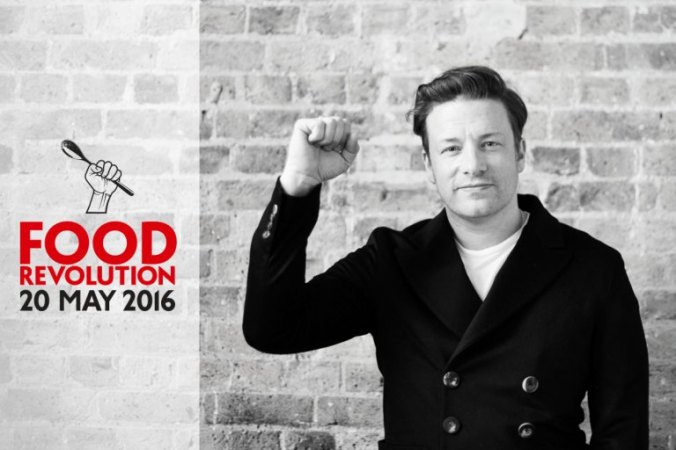 It seems lately that Food has been a topic that has come up everywhere.  I think about food choices daily as I run around in this chaotic place trying to live and balance life.  I hear my friends struggle about making food choices.  I hear in my groups, people wanting to learn more about food, food choices and nutrition.

So, with all this food on my mind, I thought it was time to remind everyone about: 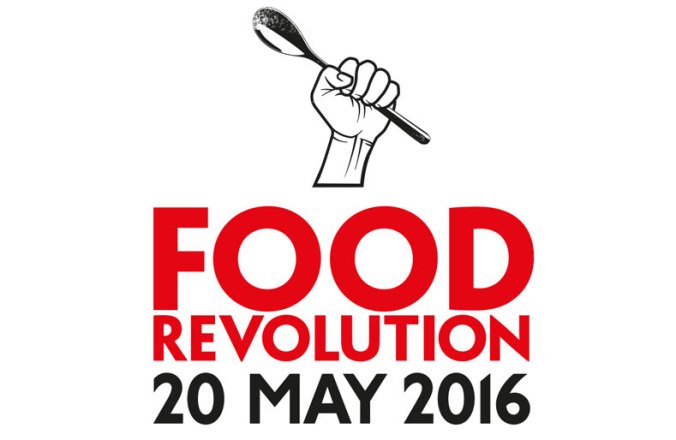 What is Food Revolution Day about?

“Access to good, fresh, nutritious food is every child’s human right, but currently we’re failing our children. Millions of kids are eating too much of the wrong food, while millions more don’t get enough of the good stuff to let them grow and thrive. We need to unite as one strong, single voice to force governments and businesses to create a healthier, happier world for the future.”  Sign up now and join the revolution!

It is up to US as individuals to teach each other about food, to help each other make good food choices and to start demanding that the world feed our children good healthy foods.  Learn more about Jamie Oliver’s Food Revolution and Jamie Olivers Food Foundation and check Out his 10 Easy Tips to Live By to take a step towards a healthier you.

A friend of mine recently challenged me to watch a documentary.  Our conversation went something like this:

Him: “You should check out the documentary called “Cowspiracy”

Me: “I probably wouldn’t make it through.  I can’t watch the animal documentaries.  I don’t eat much meat as it is, but after watching a documentary on chickens I couldn’t eat chicken anything for years.  Now it’s only organic free range expensive chickens.”

Him: “There’s nothing like that in it.  You owe it to your son to watch”

I took a little pause after I saw that.  I kind of didn’t like someone telling me I owe it to my son to do something, but another part of me felt a twinge, that maybe I should watch it.  This friend wouldn’t tell me I need to watch something unless he knows it would really mean something to me.

Me: Is it on Netflix?

Me: Ok.  You know I don’t eat cow very often and we drink a lot of almond milk because we already think cow’s milk is a conspiracy?

Him: I know.  This is probably the most important topic we face as a human race.

Wow, I thought.  What the heck is this documentary about?  I headed over to Netflix to check it out and was glad that I did.  If you haven’t watched Cowspiracy I am passing along the challenge to you to not only watch it, but to watch it and think hard about it and then challenge your friends to watch it.

There are so many things that we face as the human race and one thing we don’t talk about often enough is our food.  Where does our food come from?  What happens when we, as humans consume animals and plants, what does that do to our environment?  How have humans changed the environment by our food habits? Can our planet continue to sustain the ever growing population of humans if we continue on the same path we are currently on?  The answer to that last question is NO, WE CAN’T.  We humans need to make a change.  We need to make changes quickly and en masse if we want to continue to survive on this planet.  But first we need to educate ourselves and some of the problems that no one wants to talk about, so head over to Netflix and watch Cowspiracy.  Or head over to their website if you don’t have Netflix Then let me know what you think!