We’ve recently had an upheaval in our animal pack as two new unexpected additions have been introduced, so I thought it was time to tell the stories of each of our critters.  Every one of the animals under our care is a rescue of sorts.  I worked in animal rescue for about 10 years before I became kind of burned out and took a break from it.  I was recently thinking about taking the plunge and delving back into it when two new cats appeared on our doorstep. . .

I’ll start with out oldest critter and tell her story and make our way through down to the youngest and more recent additions.

The Story of Bella

I originally brought Bella home 20002ish to be a companion to my male cat at the time, Scout.  She was part of a litter of 6 kittens that was brought into the shelter I was volunteering at.  She and her littermates were found in the attic of a vacant house by a realtor.  The mother cat couldn’t be found but the realtor managed to gather up all the kittens.  I wish I had pictures of them.  They were tiny little fluffballs when they first came into the shelter.  They looked like little Chow Puppies they were so incredibly poufy.

Five of the kittens were solid black and one was a little brown tabby.  They were all so incredibly sweet.  You could place them in your lap and they would just roll around to be loved on and pet.  I’ve never since met a litter of kittens that were all so charming.  After sitting with all the kittens at an adoption event all day,  I decided that I wanted to bring one home to be a companion to Scout.  I picked  the remaining little girl and brought her home.  I named her Bella for the little black beauty that she was.

Bellas is all beauty and sweetness.  She is mild mannered and shy.  She can often be found hiding or sunbathing in a window.  She was an awesome companion to Scout until his death from his diabetes a few years ago.  They could often be found cuddling together (or him pinning her down cleaning her while she made annoyed faces.) 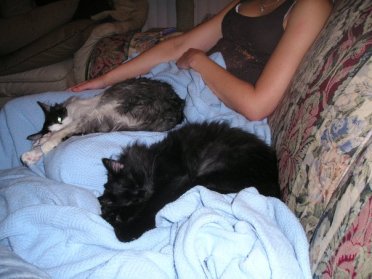 Bella is the type of cat you wouldn’t know we even have.  She is a night owl and you often don’t even notice her until evening time when she comes out to cuddle with you on the couch or curl up in bed with you.  She loved her Scout and I felt horrible for her when he passed.  He was her protector,  smacking the dog around if she bothered her.   Her snuggle buddy, and slightly annoying little brother cat.  After I felt like I could have another cat I got her another buddy, Smudge, who even though a lot younger, took to Bella as Scout had, becoming her protector and cuddle buddy. (I’ll tell you his story later).  In any case.  Bella has been by far one of the best cats I’ve ever had the pleasure of owning, and despite being an older cat she is still a bit feisty when the newbies or the dog need to be put in their place. 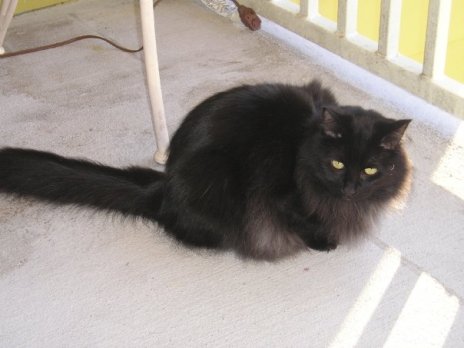 2 thoughts on “Animals of the Homestead- Bella”